Amazon's next private brand expansion will be into the toys category. Right in the middle of the holiday shopping season, the retailer listed five new ASINs, including a few climbing toys for toddlers, before promptly taking the listings back down. Though there is not yet an official release date, the new products will be added to the flagship AmazonBasics line and marketed, at least initially, to daycare operators.

Amazon's next private brand expansion will be into the toys category.

Right in the middle of the holiday shopping season, the retailer listed five new ASINs, including a few climbing toys for toddlers, before promptly taking the listings back down. Though there is not yet an official release date, the new products will be added to the flagship AmazonBasics line and marketed, at least initially, to daycare operators. Considering how closely Amazon's first foray into toys follows the closure of Toys R Us and the release of the retailer's "A Holiday of Play" print catalog, it's not much of a stretch to expect this to be just the beginning.

That being said, Amazon is not in the habit of rushing into anything. Since the introduction of Pinzon in 2005, followed by AmazonBasics in 2009, the story of Amazon's private brands from the media's perspective has been one of big expectations and little payoff. Amazon has played it very cool with their own brands, spending plenty of time on product development, testing the market and letting their products grow slowly and organically. The 'big push' we've all been expecting (and prematurely announcing) has not really happened. Amazon's total number of private products is certainly growing, but it's doing so at a careful, steady pace and the retailer isn't shy about discontinuing products and changing its approach.

The question remains: should brands be worried? Does Amazon's private label expansion threaten to squeeze them out of what has become the third-largest retailer in America by sales? For most brands, the answer is 'no.' Amazon still appears to be in the data-gathering phase and is not likely to evolve into a major manufacturer just yet. But Amazon has begun to carve out some small niches and continues to test the waters in many other categories.

So let's take a look at the moves Amazon is making in private labels and exclusive brands, how they compare to established first-party sellers, and what 2019 might bring.

Since launch, Mama Bear diapers have maintained a state of rapid growth with admirable consistency, and that growth rate is actually increasing with sales up by 45% in Q4 compared to Q3. To put it into perspective, in November 2018 Amazon sold 60 times as many Mama Bear diapers as they did in November 2017. In mid-2018, they surpassed The Honest Company and Bambo Nature and have now reached YTD sales of nearly $8 million. While this is still a far cry from Huggies' and Pampers' sales, Mama Bear's growth continues at a pace that makes it hard to predict when it's going to stop. 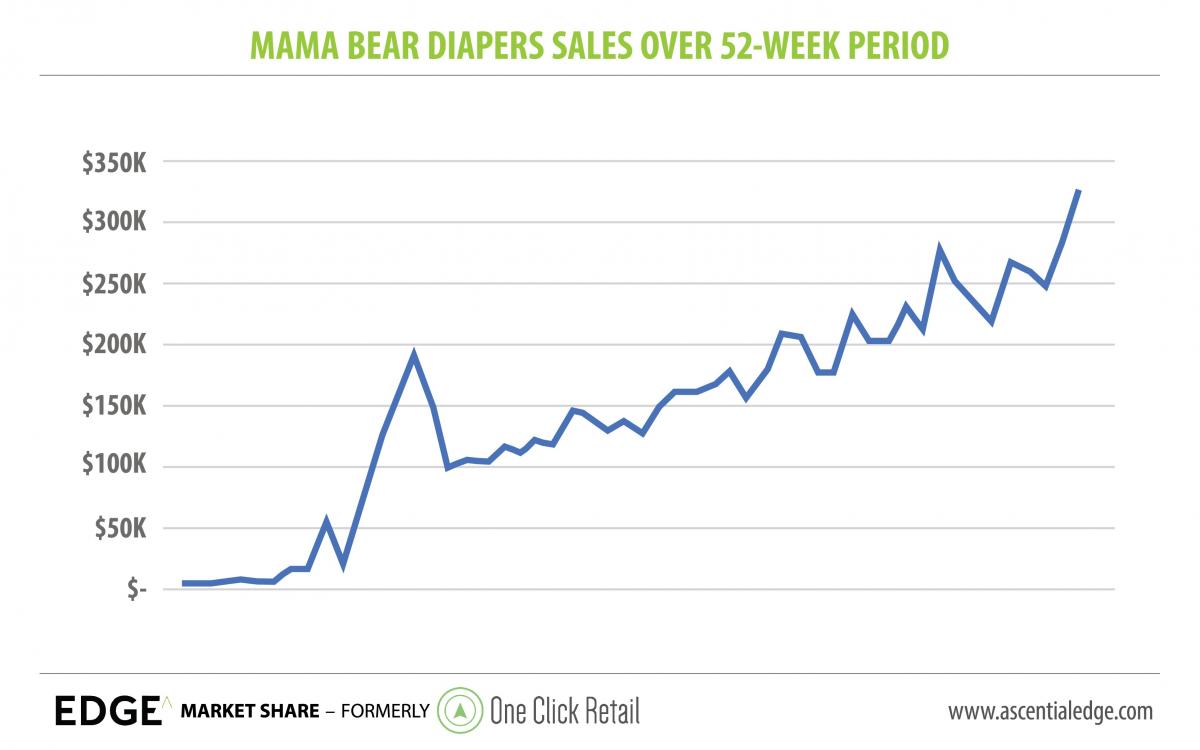 Possibly Amazon’s most profitable investment in Baby Care, however, lies outside of Mama Bear. Amazon Elements controls 11% of the baby wipes category, ranking 4th after Pampers, Huggies and Water Wipes and growing at over 20% YoY. The top two items alone earned more than all Mama Bear diapers combined in 2018.

Interestingly, in UK Amazon sells its baby wipes under the Mama Bear brand. This suggests that having found its niche with diapers Amazon intends to expand the scope of Mama Bear to become a holistic Baby Care brand, further evidenced by the recent addition of baby food and kids’ multivitamins to its assortment. But transitioning baby wipe sales from Elements to Mama Bear is a challenge that could threaten their foothold in the category, so it will be interesting to see whether Amazon is willing to take the risk.

Amazon's private brand expansion is worrying for brands that see Amazon as not only a sales channel but also a direct competitor. But some manufacturers have gotten around that problem by working with the retailer to develop their own Amazon-exclusive product lines.

In September, Amazon launched Love & Care baby formula. It's worth noting that the logo of Love & Care is very similar to Basic Care, the exclusive OTC brand manufactured by Perrigo – and if that's not enough of a hint, you can take a look at the 'Manufacturer's' responses to customer questions about Love & Care products.

Love & Care competes openly with known formula brands like Enfamil and Similac, going so far as to explicitly compare itself in the “About Product” section of the details page. It also offers a very competitive price: the category bestseller is listed at $28.49 while Love & Care's equivalent sells for $19.43 and further qualifies for Subscribe & Save and Amazon’s promotional discounts. Due to the relative newness of the brand it is hard to comment on what lies in store for Love & Care, but after a Black Friday promotion which led to a 20x increase in sales and having seen the success of Basic Care, it is definitely one to look out for.

Another example is Amazon's expansion in the Health & Personal Care space. After the launch of its private label OWN PWR, other brands have hopped on to the exclusive brand train; namely P2N Nutrition and Flexatarian which appear alongside OWN PWR as 'Amazon Brands.'

Amazon exclusives are win-win-wins, allowing brands to work directly with the retailer to identify unmet consumer needs, allowing Amazon to increase its competitive advantage and allowing consumers to benefit from the lower prices made possible by house brands.

Is Solimo the Next Big Thing?

Presto! is one of Amazon's success stories. Since the brand's release in 2017, it has captured nearly 8% of the paper products market, while also seeing a 70% growth in sales of its laundry care items.

Despite being one of Amazon's most successful private brands by category share – Presto! ranks as the #2 brand in both bath tissue and paper towels – the retailer recently introduced self-competitive products under the Solimo brand. Solimo bath tissue and paper towels were released in September and have earned approximately $200k and $100k respectively in sales so far. This raises the question: is Amazon trying to amalgamate brands?

Solimo has been Amazon's private label wild card for a while, with products ranging from adult incontinence, household consumables, multivitamins and feminine care products. From Q3 to Q4, the brand's sales increased by 26%, driven in part by the success of its coffee pods. Solimo coffee has grown to command equal or even higher market share than some very popular coffee pod brands on Amazon, with weekly sales in Q3 averaging over $300,000 and over $7 million in total YTD. 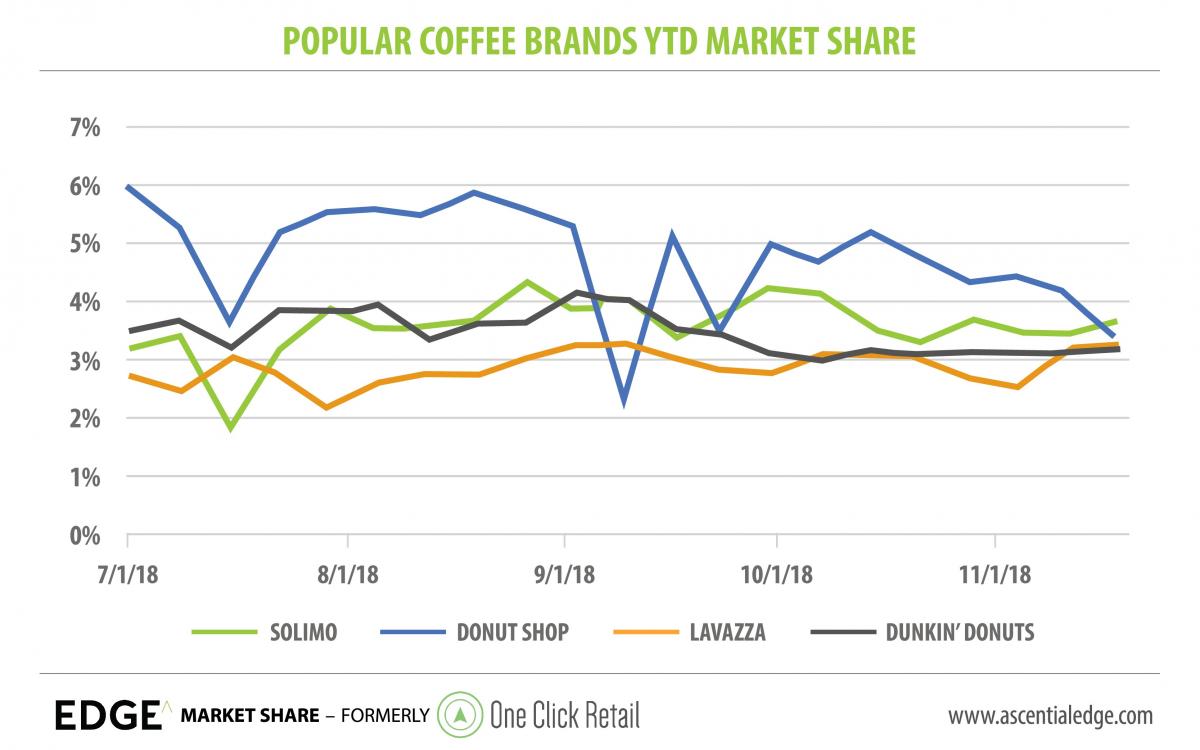 There is reason to believe that Amazon has chosen Solimo to be its catch-all consumables brand. The broad assortment continues to grow with health supplements added in June and dog food added in September.

The latter is especially interesting as Amazon had launched Wag dog food as recently as May. Wag and Solimo have nearly identical details pages for their dog food items, though Solimo is the lower-priced. This might hint at Amazon’s trial and error methodology – they may be using Wag and Solimo as an A/B test to see how small variations in price, size and promotion could impact sales, gauging customer interest and using that as a means to further refine its current offerings.

Another interpretation is that Amazon may be attempting to amalgamate its products under the Solimo brand. Wag is currently heavily promoted and Solimo is not, which is odd considering how recently Solimo was launched – unless the purpose of the promotion is to liquidate Wag products so that Amazon can then transition those customers to Solimo.

On the other hand, we've noticed another similar move by Amazon – but in the opposite direction. Solimo's health supplements were released in June and grew by more than 60% from Q3 to Q4, but in late September Amazon introduced a new health supplements brand, Revly. The latter remains smaller than Solimo but both brands experienced average weekly sales of $10k during their first month, showing a similar relative popularity between the two brands.

This lends more credence to the A/B testing interpretation of events, which comes with its own questions. The cost of developing and launching a single brand is significant and the fact that Amazon is willing to launch multiple brands with similar assortments within months of each other reveals how serious the retailer is about its private brand strategy.

From infant formula to diapers and kids’ multivitamins in the baby category, paper products in household consumables and even pets, Amazon is making moves with its private labels and exclusive brands. It clearly identifies markets with either high traffic or too little brand presence and uses its existing loyalty to build a new customer base for its own products.

Will 2019 be the year that Amazon finally makes its 'big push'? We don't think so. Amazon is more likely to continue in its slow build, introducing new products carefully, backed up by plenty of data and research and always willing to experiment with new strategies and change when something isn't working. Rather than aggressively taking on the competition, Amazon's private labels and exclusive brands will sneak up on us, growing organically and finding their way into the minds and carts of consumers. Two of Amazon's core principles are stated as "customer obsession rather than competitor focus" and "long-term thinking" and these two principles are key to its private brand strategy.

20 Jun 2022
Blog
Shaping the store of the future
“As ecommerce accelerates, so store-based share of chain retail declines - from about 85…
Read More

Get monthly Amazon news from our experts.

By clicking the sign up button, Ascential companies will use your information to register you and to stay in touch regarding our products and services. You can unsubscribe at any time. You agree that the data you provide above can be transferred out of the European Economic Area.
Request a Free Consultation to Find Your Edge and Learn More