Retailers are battling to win former Toys R Us customers. This is the first holiday season without the iconic toy chain and its absence poses a major opportunity for retailers looking to cement their position as the new go-to toy store for millions of American consumers.

Retailers are battling to win former Toys R Us customers. This is the first holiday season without the iconic toy chain and its absence poses a major opportunity for retailers looking to cement their position as the new go-to toy store for millions of American consumers.

When Amazon announced its intentions to pick up what Toys R Us put down, it wasn't subtle about it. In November, Amazon launched the 'A Holiday of Play' catalog, clearly designed to fill the void left by the beloved Toys R Us catalog, complete with a retro design aesthetic. In mid-November, this 70 page catalog was mailed to millions of homes and retail locations throughout the US, complete with QR codes which link directly to Amazon.com.

Now that Thanksgiving is behind us and we are officially in the thick of the holiday shopping season, let's take a closer look at Amazon.com's Toys product group and the biggest trends that will carry the retailer into the new year as one of the biggest toy sellers in America. 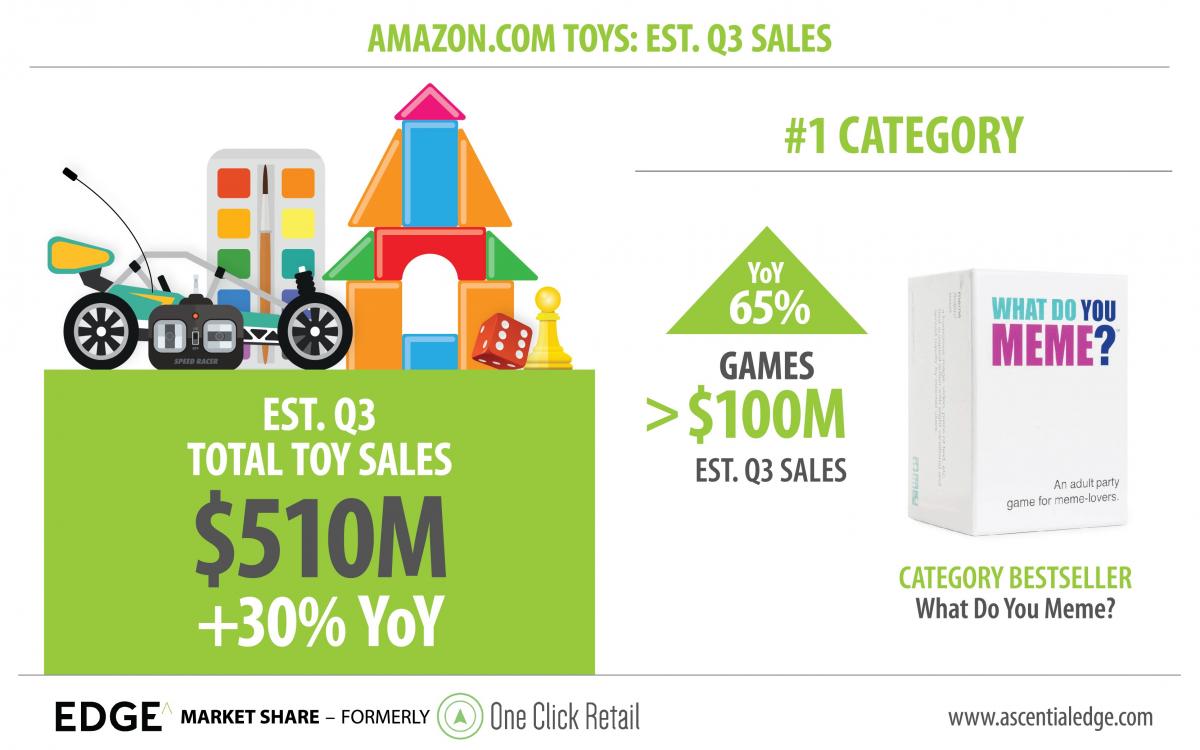 As has become an annual tradition, Amazon announced last week that Cyber Monday set a new record for the retailer's biggest ever sales day. While refraining from sharing too many specifics, Amazon revealed that it had sold over 18 million Toys over the 5-day period from Thanksgiving Thursday to Cyber Monday.

So Amazon's efforts to win Toys R Us customers have been working. A survey of over 1,000 former customers conducted by online advertising company Criteo found that a third of respondents considered Amazon to be their 'retailer of choice'. However, this survey also identified Amazon's biggest disadvantage: only 5% of respondents said that they would use ecommerce exclusively, with nearly 70% of people planning to split toy shopping between online and physical retailers.

Even as traditional chains like Walmart and Target are investing in their digital presence and improving their ecommerce capabilities, Amazon is recognizing the limitations of online retail and expanding its physical footprint. Despite being perceived as old fashioned, the catalog channel is alive and well and adds a valuable element of experiential retail for customers who will end up making their final purchase via Amazon.com. The retail and tech giant is also expanding its brick-and-mortar presence, with toy shelves appearing at Whole Foods stores and the new Amazon 4-star chain proving popular with toy-buying audiences.

To date, there are three Amazon 4-star stores, in New York, Berkeley California and Lone Tree Colorado. These stores sell only items with at least a 4-star rating and many of the publicity photos have prominently featured toys like Lego sets and board games. During Black Friday Weekend, the bestselling item at Amazon 4-star stores was L.O.L. Surprise!, six variations of which also rank among the top 50 toys on Amazon.com as of the end of Q3 2018. 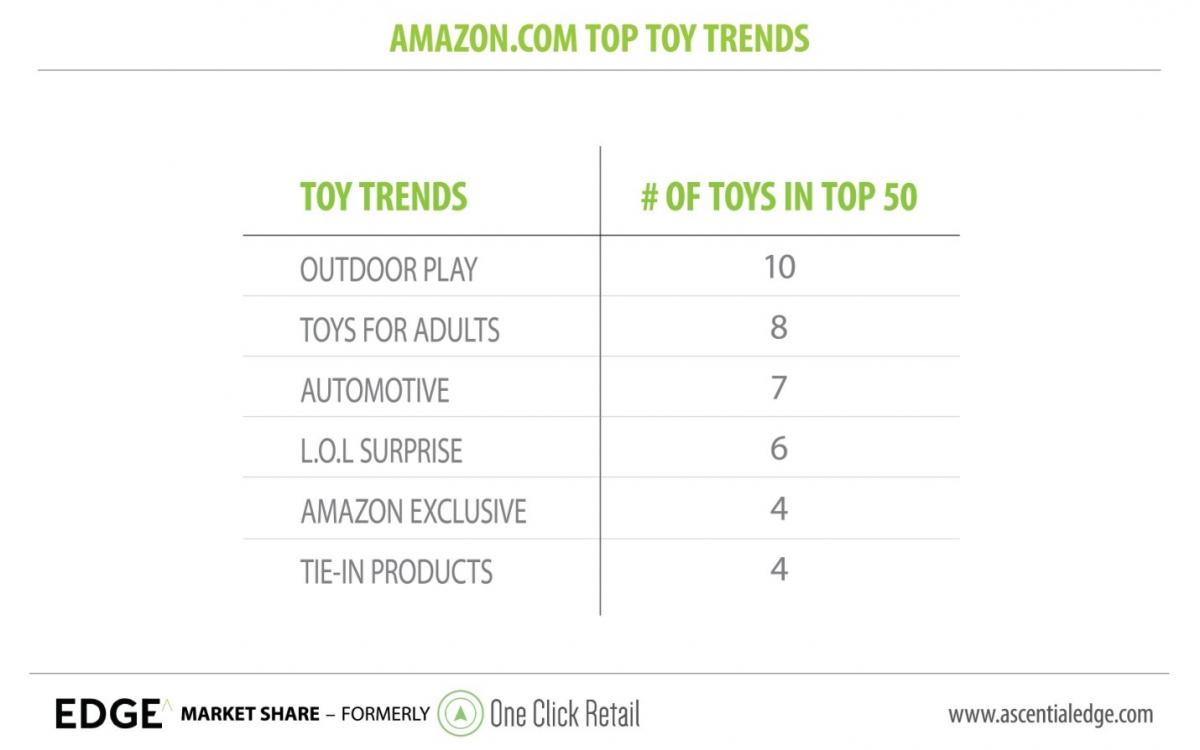 Online and in-store retail are two very different things – and this is doubly true in the toy market. Part of what made Toys R Us famous was how families would make trips to the store, the kids would explore and try any toys that caught their eye while the parents would get suggestions and advice from the staff. In this regard, Amazon is at a disadvantage. Parents go on Amazon to buy toys for their kids, but they either already know what they're going to buy or they rely on customer reviews rather than the whims of their children and advice of professionals.

Brands especially need to understand this difference. Traditional toy stores allowed brands to use eye-catching packaging, well-known brand properties and physical interactivity to market directly to children in the store. Today, Amazon.com controls the largest share of holiday spending – Rakuten Intelligence puts the figure at 28% – so brands need to use new tactics to reach kids, their parents, or both so that when toy shoppers go to Amazon, they already know what to type into the search bar.

In our previous Toys report, we predicted that the Amazon.com 2018 holiday season would be all about Games, and that prediction has been supported by the very strong growth experienced in Q3 2018. In the quarter leading up to the crucial holiday quarter, Games grew by 65% to reach an estimated $100 million in sales, made up of mostly 'analog' games such as board and card games, puzzles, and other group games like Jenga.

The Games category also represents one of the larger trends evident on Amazon.com: toys for adults. Toys and games marketed to adults made up 8 of the top 50 toys during Q3 2018 and most of those products were board or card games. And because both adult and family-friendly board and card games are group activities, their popularity soars when family and friends to get together and celebrate the holidays, so we expect this category to continue this strong growth through Q4. 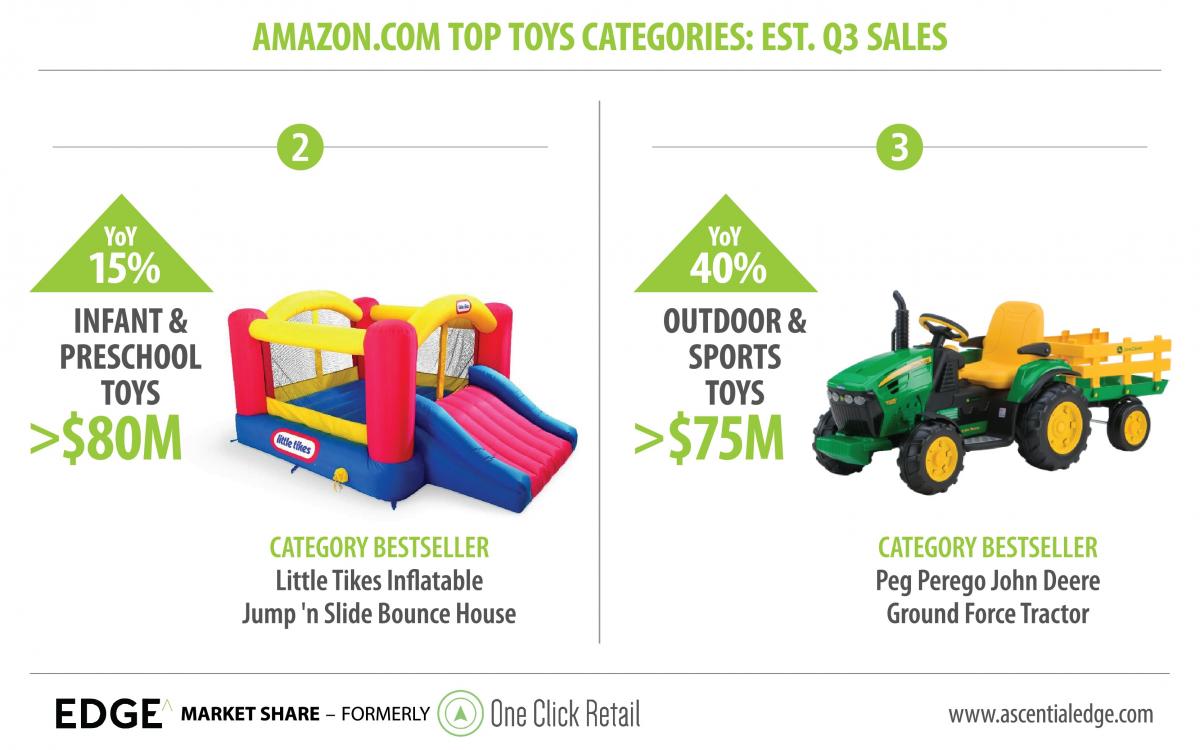 Coming in second after Games, the Infant & Preschool Toys category is dominated by Little Tikes, controlling the highest share of items in Amazon's top 50 toys. The bestselling toy during Q3 2018 was the Little Tikes Inflatable Jump 'n Slide Bounce House, one of the most expensive products sold by the brand and therefore a huge success. Amazon has also partnered with Little Tikes to offer several Amazon-exclusive items, three of which appeared in the top 50 toys on Q3. By working with brands to manufacture toys specifically for its platform, Amazon is seeking to gain a unique competitive advantage over other retailers.

But Little Tikes isn't without competition. On Prime Day, Melissa and Doug were able to outdo the larger brand, with sales peaking at 40% higher than Little Tikes. This is a good example of the power of deal days like Prime Day, Cyber Monday, Super Saturday and Boxing Day to enable smaller brands to compete with and surpass category leaders.  The holiday season is the most highly-trafficked time of year for both online and offline toy sellers, so it's a brand's best opportunity to reach new customers.

Little Tikes also controls a strong stake in what was the biggest toy trend of Q3 2018: Outdoor Play. Toys designed for outdoor use or with an outdoor theme, most of which fell under the Outdoor & Sports Toys category, made up 10 of the top 50 toys on Amazon. These include yard games, sports activities, toy tractors and a market-leading performance by Nerf.

The growth in Outdoor Toys, second only to the Games category, is being driven by parents who are making an effort to raise active children. The popularity of outdoor-themed toys which can be used indoors is due to parents trying to keep kids interested in physical activities and reduce their time spent on devices through the cold winter months. This is another example of how toy shopping on Amazon differs from physical retail – consumers are less prone to impulse buying and less likely to be begged by their kids for specific flashy products, so they're more thoughtful and intentional in their purchases and more likely to buy toys that serve a function, be it active play, educational or skill-building. 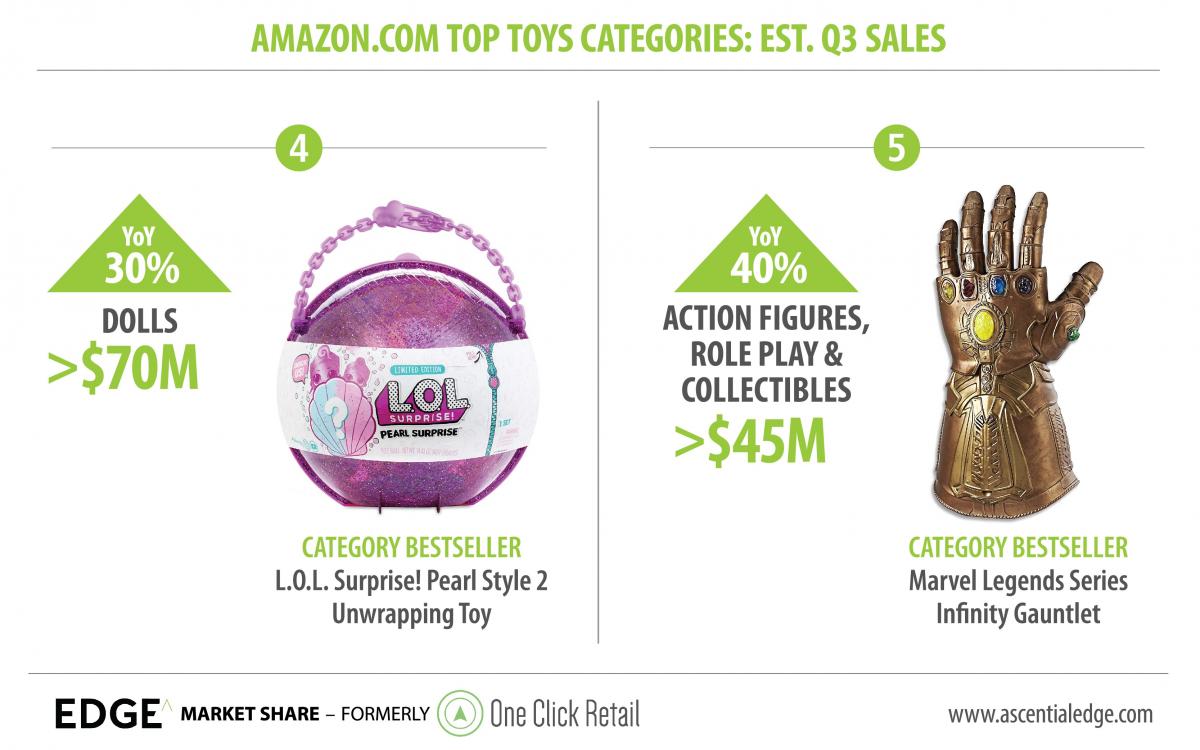 Despite early concerns about a smaller than expected holiday forecast, Amazon.com is very likely to rank as the largest single toy seller in the US during the 2018 holiday season. The Dolls category is driving sales, with L.O.L. Surprise! still trending and claiming 11% market share as of the end of Q3, second only to Barbie's 18% share. Tie-in products such as the Marvel Legends Infinity Gauntlet are drawing a loyal following, nearly doubling in sales in Q3. And the 'A Holiday of Play' catalog allows Amazon to reach kids directly in their own homes.

Now well underway, the holiday season is the biggest sales period for toy brands, many of whom make half of their annual sales during Q4. As the first year since the liquidation of Toys R Us, retailers are working hard to pick up the slack while brands are hedging their bets, anxious to see who comes out on top. But one thing's for sure: every toy retailer in the US is likely to have its busiest year yet, so brands need to recognize the unique advantages of each and how trends and consumer behavior can vary from channel to channel. Amazon is not the only one making a push into toys this holiday season – toymakers can't afford to be left behind.