Let's take a closer look at Amazon.co.uk's Toys product group as we enter the most important shopping season of the year.

In the first nine months of 2018, the British toy market fell by 5%. Toymakers have struggled in the wake of the collapse of Toys R Us, which announced the closure of all 100 UK locations in March, leaving toymakers without the 'the world's biggest toy store' as a key sales channel. Consumers have, so far been slow to find new places to shop - but now that the holiday shopping season is here, that's all going to change.

There is reason to believe that the lull in toy-buying during the first three quarters of 2018 is going to result in greater toy sales during the holiday season. In the UK, holiday sales typically account for one third of annual spending on toys. British consumers reduced their toy spending in the first nine months of this year, which puts them in a position to make up the difference in the lead-up to Christmas.

The question is: where will former Toys R Us customers go? Retailers throughout the UK are working to capture these consumers and Amazon is no exception. As of 2017, Amazon is the 5th largest retailer in the UK, after only the big four grocers. In toy sales, Amazon.co.uk is second only to Argos, but the former is growing more quickly and forecasts predict that it will rank as the number-one toy retailer by 2020.

Let's take a closer look at Amazon.co.uk's Toys product group as we enter the most important shopping season of the year. 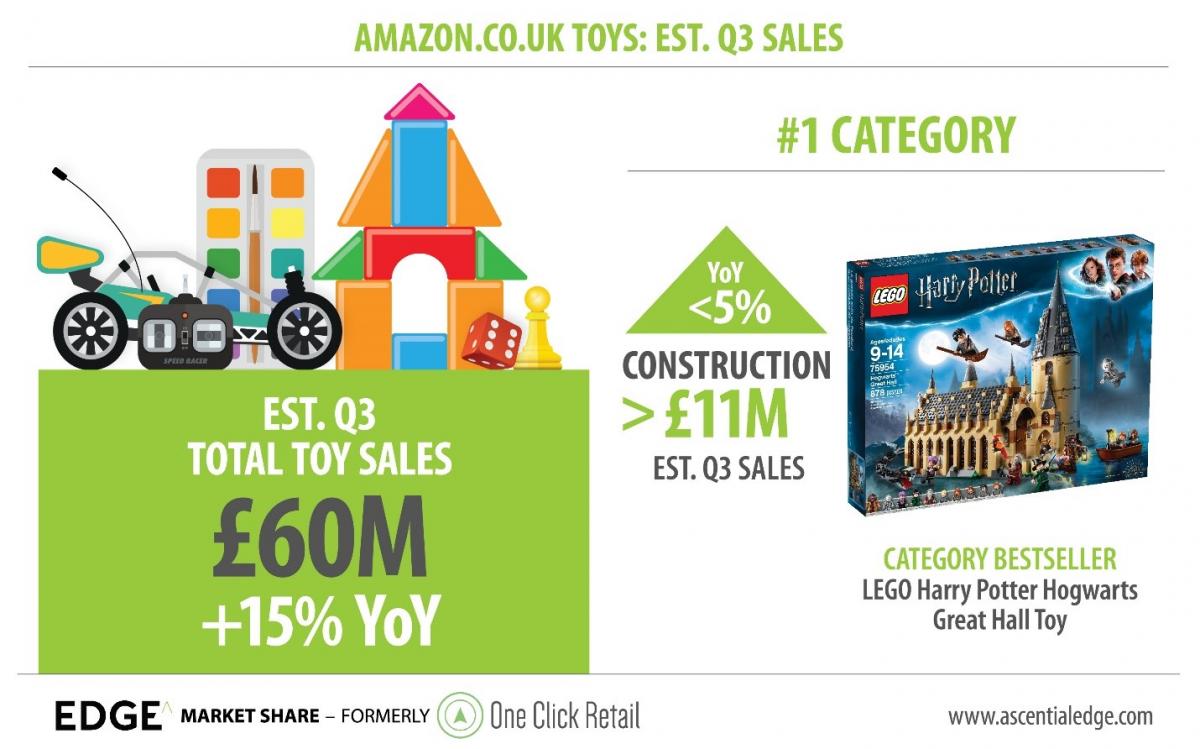 The UK is Europe's biggest toy market and has one of the highest rates of online penetration of any retail category. 36.8% of toy sales in 2017 took place online and, with the closure of Toys R Us in the early part of the year, that number is going to increase measurably in 2018. Though Amazon.co.uk does not (yet) control the largest share of these sales, the retail and tech juggernaut enjoys the highest customer loyalty: 61.2% of customers shop at Amazon frequently, significantly higher than Argos (47.8%), driven by the Amazon Prime subscription service, user-centricity, infinite shelf and low prices.

Toy market growth is happening at the extremes. Millennials with young children are now the largest consumer cohort and they are driving toy trends in two opposing directions.

On one extreme, having grown up with digital technology, millennial parents are comfortable with robotic and/or app-enabled toys such as the Sphero Star Wars BB-8 App Enabled Droid, the #3 bestselling toy of Q3 2018. Innovation-led toys with new technologies such as voice control and augmented reality will continue to drive growth among young parents already accustomed to digital technologies.

On the other extreme, these same parents are also more mindful of their purchasing decisions, not only investing in high-quality educational or skill-building toys, but also returning to traditional toys. This trend is influenced by two things: parents are making an effort to reduce screen time for their children and encourage more active play and social activities, while at the same time they are nostalgic for the classic (and non-digital) toys they remember from their childhoods. 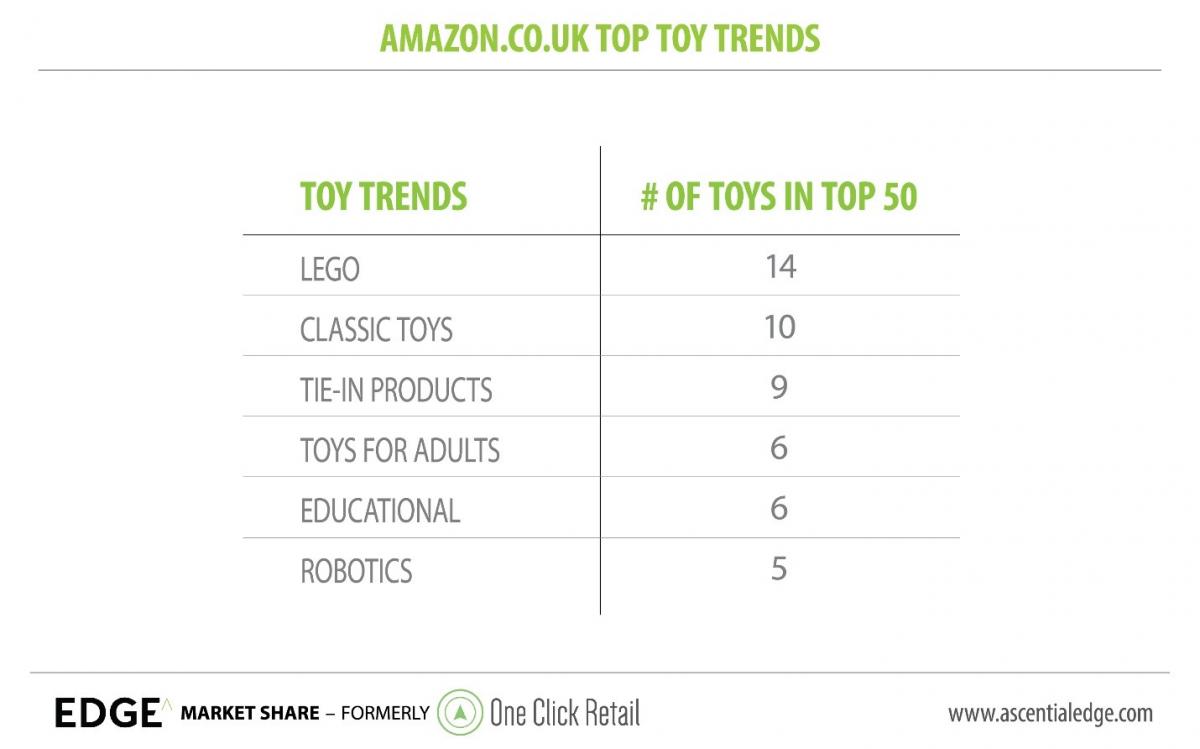 One toymaker sits at the centre of many toy trends in 2018. LEGO, the classic construction blocks brand, produced 14 of the 50 bestselling toys on Amazon.co.uk during Q3.

First, these bestsellers included two retro LEGO Classic Creative Brick Box sets. These are the simple LEGO block sets we remember from our childhoods, no digital components and no preset designs. This type of construction set puts a child's imagination at the centre of play and fosters creativity, problem solving and design skills. The popularity of this type of toy among parents and children alike has helped make Construction the largest toy category on Amazon.co.uk, but toy buyers are opting for classic toys across all categories, from Scrabble Original in Games & Puzzles, Little Tikes Classic Cozy Coupe Ride-On in Outdoor & Sports Toys and Hot Wheels in Action Figures, Roll Play & Collectibles.

Second, six of LEGO's 14 leading toys are tie-in products, four of them associated with the Harry Potter franchise. Tie-in products are performing especially well in the UK compared to Amazon's other markets and with recent and upcoming movies in the Star Wars, Marvel, Harry Potter, Jurassic Park and Toy Story worlds, this trend is a very safe bet. In addition to its licenses, LEGO now also has its own film franchise, with two films released in 2017 and another two scheduled for 2019 release.

Third, the LEGO Boost Creative Toolbox Robot Building Kit (#4 bestselling toy of Q3 2018) is the brand's contribution to the growing robotic toy trend. It joins brands such as Sphero and Anki in marketing robotics to kids. Robot toys have actually diminished in popularity this year – Anki Cozmo was 2017's #1 toy on Amazon.co.uk but fell to #38 as of Q3 2018. This is due in part to the resurgence of classic, non-digital toys, but it is also a result of the fact that the current generation of robotic toys is now several years old – we expect another boom in the robotic toy field in the next year or two.

Finally, LEGO is also playing a role in the toys-for-grownups trend. The brand's Technic line (three items in the top 50) is less like a traditional LEGO set and more like a model car. Many of these advanced construction sets are marketed to a much older audience than their classic toys. Additionally, toy spending 'by adults, for adults' is on the rise and LEGO is benefitting from this trend, with grown people rediscovering their love for the activity.

LEGO is an example of a brand casting a very wide net and finding loyal customers in many different places. Even smaller toymakers that can't afford to produce an infinite shelf of products can learn from LEGO's example that a potential customer's path to purchase can come from many directions and be influenced by countless trends. 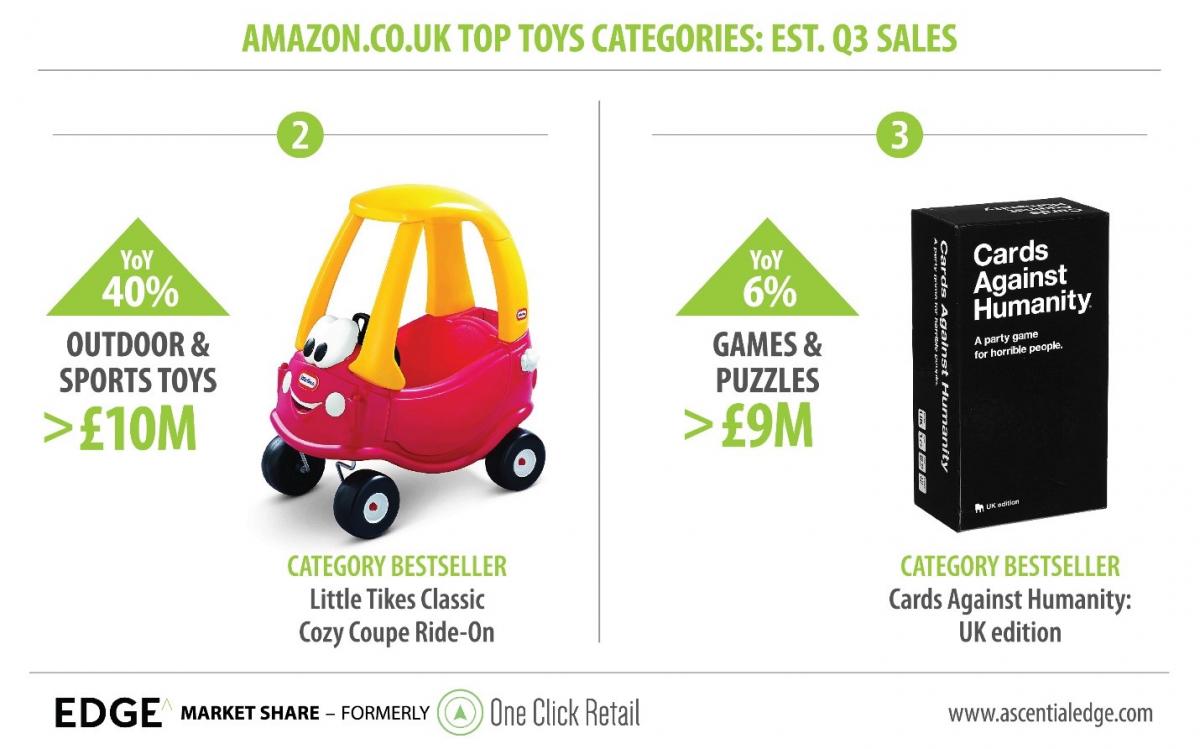 The fastest-growing toy category on Amazon.co.uk is Outdoor & Sports Toys, which grew by over 40% YoY during Q3 2018 to surpass Games & Puzzles and Infant & Preschool in total sales. Many toymakers in this space benefitted from a very successful Prime Day which saw the category tripling its sales compared to 2017. The lift generated on Prime Day by leading brands Little Tikes and Nerf helped to increase their visibility ahead of Cyber Weekend and into December, positioning them for a very successful holiday season.

When we look closely at the Outdoor & Sports Toys category, we find a high proportion of outdoor-themed toys which can also be used indoors. This category is driven by parents making an effort to raise active children, trying to foster an interest in sport and physical activity even through the cold winter months. Similarly, parents are also trying reduce their kids' screen time and encourage more social activity, which is driving growth in Family Gaming and Strategic Card Games, two subcategories of Games & Puzzles (although it's interesting to note that the top spot in the Games & Puzzles category is held by Cards Against Humanity, a game for adults).

Both of these trends are influenced by the nature of ecommerce – consumers are no longer bringing their kids to the toy store, so they are less likely to impulse buy some flashy, brightly-packaged toys and more mindful of the potential benefits of their purchases, be it active play, social activities or educational/skill-building toys.

That being said, brick-and-mortar stores are poised for a comeback. With Toys R Us now gone, independent toy stores have returned to High Street and many families value the experience of seeing and trying out different toys in person. The effect of this can be seen by the fact the L.O.L. Surprise mystery collectible dolls are the UK's bestselling toy of 2018 and yet only ranked as #49 on Amazon.co.uk in Q3 2018.

Online and in-store retail are two very different things and toymakers need to recognize the role that each channel plays in reaching customers. The toy store on High Street can provide families with the experience of playing with a toy, while Amazon can offer them the convenience finding just the right item. When parents go online to shop for their kids (or for themselves), it's because they already know what they want or they want to see what other customers are saying about it.

Most toymakers make over a third of their annual sales during the holiday season and as the first year with Toys R Us, more of those sales are going to go online. Though the UK toy market is in decline, Amazon is still growing strong and increasing its market share while also enjoying the most loyalty from its customers. In the coming years, Amazon.co.uk will be at the heart of growth in toy retail.