Black Friday ecommerce sales are on pace to smash all previous records as lockdown restrictions force shoppers online to find a deal. Edge by Ascential Insights Manager Chris Elliott has analysed a range of popular shopper search terms across the UK’s favourite retailers to see which manufacturers are positioning themselves to grab this extra slice of sales this year. 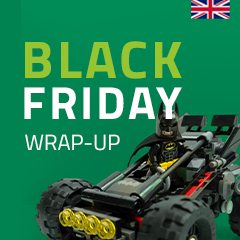 The Black Friday weekend is upon us, and it brings with it a giant 53% increase in ecommerce sales compared to last year*. In lieu of the physical shelf this year, manufacturers must be putting all their focus on optimising for the digital shelf, and must ensure their products are prominently visible to shoppers at this peak time.

Most shoppers will be visiting retailers knowing what type of products they are looking to purchase. Therefore, it is imperative that brands return for commonly used search terms, as this is where most traffic will be. They should be aiming to return in the top 10 as many shoppers will not scroll past this point. The reward for this is evident, as the impact of moving from 20th to 10th position can be as much as a  21% increase in traffic.

In this analysis, Edge by Ascential will be looking at the most popular search terms in each category across various retailers to see which brands are set to catch shoppers’ eye first, maximising their potential sales.

Consumer Electronics are the most prominently promoted products on Black Friday, with Televisions, in particular, being associated with the day. Samsung won the biggest share across the retailers analysed, with the greatest share on Ao, Argos and John Lewis. None of its products returned in the top 10 on the Amazon website where RGTech had the top 3 sponsored spots, with the remaining spots going to lower-cost models from LG, TCL, and RGA.

In Laptops, HP were best positioned with a 60% share of the Currys top ten results, and the joint highest share on Amazon and John Lewis. It was only on Argos where it suffered, with Acer achieving a 50% share.

Sony had the greatest average share for “Headphones”, with the greatest share on Ao and Argos and the joint-highest on John Lewis. Amazon had several smaller brands such as Mpow and Vankyo in the top ten, but Avantree had the top three positions.

Many shoppers will be using the Cyber 5 weekend to purchase Christmas gifts, so Toys are guaranteed to be a popular area for shoppers.

For the search term “Toys”, Lego dominated results with a 100% share of the page on John Lewis and 40% on Amazon. However, when we looked at the term “Kids Toys”, this reduced significantly, as brands aimed at younger children were more prominent.

Interestingly, Very used the search term “Toys” to prominently promote the Nintendo Switch and Xbox One, this is at a time when games consoles are the sought after item, although not these models.

For the term “Board Games”, we have summarised by manufacturer and it is no surprise to see Hasbro at the top. However, it was Exploding Kittens that had the greatest share on the all-important Amazon with the brand of the same name and its Throw Throw Burrito Game.

Nutribullet had the greatest share; however, all of its 70% share was on the Currys website. There were a large number of brands that returned for “Blender”, with six brands returning in the top ten on Amazon and Argos and seven on John Lewis.

Nespresso had the greatest share of the brands returning for “Coffee Machine.” The Krugs manufactured machines returned more than the Magimix and Sage Nespresso products. Outside of this, De’Longhi, Sage, and Tassimo (Bosch) also performed well.

Shark led the way in Vacuum Cleaners with a 60% share of the Amazon and Currys website and the greatest share on Argos. On John Lewis, Dyson had a 60% share, including three of the top four results. However, given its importance, Shark having three of the four top results on Amazon stands them in excellent stead.

Black+Decker narrowly beat out Bosch to the greatest average share for “Drill.” It had results in the top ten of all the retailers analysed, but it's 60% share on Very took it to the top. Bosch didn’t return on Very but importantly had a 40% share on Amazon, all top four positions, compared to Black+Decker’s 10% share.

Black+Decker more convincingly won for the search term “Power Tools” with a 40 and 50% share on Argos and Very respectively. Amazon’s results were brand diverse, with only Draper and Greenworks returning more than one product

For “Circular Saw,” results were much more even across brands. DeWalt and Makita were found at the top, with Bosch closely following. It may have trailed DeWalt and Makita, but Bosch had the top three positions on Amazon and top two on Currys. This is likely to provide a higher return than the shares that other brands had due to the amount of traffic to Amazon and Currys.

Braun narrowly beat out Phillips for the greatest share for “Beard Trimmer”. Both had large shares on Amazon and Argos, but Braun didn’t feature in the top ten on John Lewis, and Philips was missing from Currys.

Ghd was top for “Hair Straighteners,” although this was primarily due to its 60% share of results on John Lewis. It trailed Kipozi in total share on Amazon but did have the top returning product. On the Currys and John Lewis websites, results were more distributed between brands such as Nicky Clarke, Remington, and Revamp.

Oral-B dominated results for “Electric Toothbrush” with all of the top ten on Argos and 80% and 70% on Amazon and Very respectively. The only place it didn’t have the greatest share was on Superdrug, which preferred to push its Own Label products.

In Sport & Leisure we have looked at a variety of search terms targeted at Wearable Tech and found that results can vary significantly for slightly different search terms.

SmartWatch is less focused on fitness and more towards technology, so it’s no surprise that Apple and Samsung won; however, neither had results on Amazon. Again, Amazon had a variety of brands in its top ten (9), but it was Xlusive, Motast, and Willful that held the top three positions.

We’ve seen who is in pole position to win this Black Friday but look out for our blog on Cyber Monday where we analyse search trends to see which brands won the most prominent search rankings over the weekend and on Cyber Monday itself.

If you’d like to connect with one of our experts to discuss how you can optimise your holiday planning, fill out the form below.

Lazada, Shopee, and Tokopedia have all implemented Group Buy options where individuals…